While the Piggyback Forklift might be one of the most unique forklifts on the market today, it can be quite difficult to decide whether or not it is right for the job at hand.

The Piggyback Forklift may have a silly name, though it means serious business.

The Piggyback is an invention of the Princeton Company, who has been making truck mounted forklifts for well over 30 years now. The idea of the Piggyback is fairly simple, though a lot goes into the design details to ensure total safety and optimal productivity.

Let’s explore the finer details of Piggyback forklifts so that you can decide if they are the right fit for the job!

A History of The Truck Mounted Forklift

The Piggyback Truck Mounted Forklift is a child of Princeton Delivery Systems, which is one of the leading truck-mounted forklift product manufacturers in North America. Princeton has a nationwide network of dealers that they use to manufacture and distribute material handling equipment. 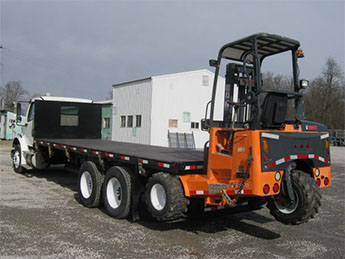 It wasn’t until 1979 that the company developed the very first Piggyback Truck Mounted forklift, which quickly became one of the most practical pieces of equipment on the market with a mounting system that was also meant for working with building materials, roofing, agriculture, lumber, and more.

The Piggyback Truck Mounted forklifts that we see today have much larger lift capacities than they used to, some of which can load up to 8,000 lbs. The company provides customers with a wide range of both three-wheel drive models and four-wheel rough terrain vehicles. 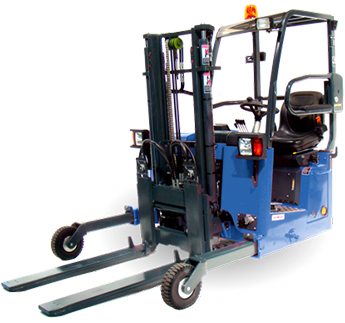 The PB36 is made to fit on single axle delivery trucks and is perfect for beverage, bottled gas, and doors/windows operations.

For those who are familiar with the Piggyback Z1, this is simply an upgraded model.

It is much lighter and narrower in design, perfect for transport behind beverage-style vehicles.

The PB36 makes use of retracting wheel arms so that it can mount to the back end of trailers as well.

The PB36 offers all-weather performance and can work over long distances. Thanks to the small design, it is perfect for working in smaller garages or retail sites. One of the best things about the PB36 is that the engine is a Tier 4 Final compliant engine, providing operators with serious horsepower, top-notch fuel consumption, and higher torque. Plus, you won’t need to service the vehicle nearly as much as older models.

The PB45 Turfmate is the go-to piece of equipment for sod applications. It is built to streamline the delivery process. Thanks to the fact that Princeton has been in the turf game for many years, they have received tons of customer feedback and design suggestions, many of which they have implemented to provide users with higher serving vehicles. The PB45 Turfmate shows that right off the bat

The vehicle has incredible power under the hood, though it remains light enough so that you can mount it on the back of a truck or trailer with ease.

The Piggyback design allows workers to quickly dismantle the mount with ease too so that it only takes a few minutes to get to work.

The PB45 Turfmate has a lift-capacity of 4,500 lbs and uses a powerful Tier 4 Final compliant engine. This particular model provides operators with a foot of ground clearance and it is a surprisingly agile machine for the shape. The efficient hydraulic system takes away the need for more horsepower, improving fuel efficiency and generating less heat during operation. 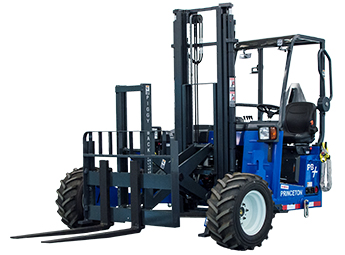 The Princeton PB45 STM Forklift is a static mast forklift that provides operators with a capacity of 4,500 lbs.

It still retains a compact character and a low-profile design that makes it incredibly versatile for all different types of terrain.

The low-profile design also makes it a great choice for those working in areas with low overhead clearance.Working outdoors on uneven terrain is a no-brainer with the added stability.

The PB45 STM weighs 4,500 lbs in all and comes with all-wheel-drive. You can unload out of one side thanks to the pantograph extension arm. One of the more impressive things about the PB45 STM is that it was designed with a much shorter length than its predecessors. You can configure the STM with a 53” overhand, providing the right amount of length to mount it to 48-foot trailers. 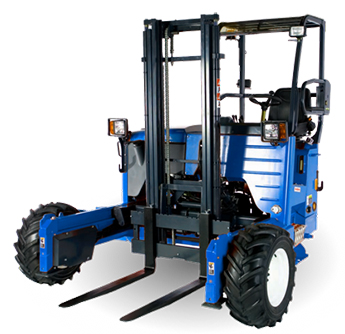 The PB50+ is a bigger machine that works great with a number of applications, including drywall, doors and windows, lumber, general building materials, roofing, sod, and more.

It is the company’s middle-of-the-line machine that provides operators with just over 5,000 lbs of lifting capacity.

With that said, the vehicle is fairly compact. It provides just about everything an operator might need for lifting and delivering lighter products, such as roofing, insulation, building materials, and more.

The PB50+ has a very stable design, making it a great choice for outdoor operations. Even though it weighs in at just around 5,000 lbs, it has a solid stance and a rugged build. The Princeton engineering team has designed the PB50+ with a low center of gravity and solid ground clearance to work on uneven terrain. Just like the STM, the PB50+ was designed with a much shorter overall length so that it can be configured to a 56” overhang and mounted on 48-foot trailers.

Stepping it up a little bit, the PB55+ 4-Way is one of the most versatile lifts in the Piggyback lineup.

It comes with a 5,000 lb capacity that makes it a solid choice for larger jobs, including drywall, roofing, lumber, and general building materials. The PB55+ 4-Way is superior to the regular PB55+ in terms of directional steering , though it shares the same lift capacity and power.

You can easily convert it into a side-directional machine with the flip of a switch, meaning you can drive it sideways facing the direction of the load you are carrying.

If you are dealing with very long loads that are difficult to navigate narrower sites with, or if you are working in areas that are highly congested, having this feature is a lifesaver. There aren’t any other machines on the market quite like the PB55+ 4-Way, and if you are looking for a lift that can outperform and outmaneuver the rest, this one is it. 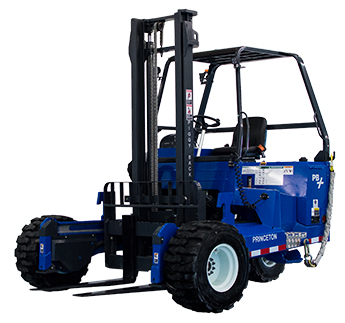 The PB80+ is one of the big boys on the team. It is perfect for drywall applications, lumber, moving and storage, and general building materials.

It comes with an 8,000 lb capacity and is meant for handling heavier products.

The PB80+ also provides users with center seating to provide operators with clearer visibility when it comes to the load and the front tires. Essentially, the PB80+ takes out the guesswork in congested sites, increasing the overall safety of the operator and those around him/her.

Like we said before, Princeton is one of the leading dealers of forklifts in North America. The company has a massive dealer network that finding and purchasing your lift a breeze. If you are interested in purchasing a Princeton forklift, make sure to visit the dealer locator on the company website.

Final Verdict - Should You Get a Piggyback Truck Mounted Forklift?

Princeton Piggyback has manufactured some of the most innovative forklifts over the past few decades. For the sheer fact that you can hook these onto a large truck or trailer with a heavy-duty mounting system and haul them to a job site with ease is a practical application that we’re surprised no one had come up with before.

Beyond that fact, the forklifts that they create make use of high-quality design features and Tier 4 Final compliant engines with serious torque and power. Whether you are looking for a lift to perform a sod-specific job or beyond, we highly recommend looking into Piggyback forklifts!

Get Started with Piggyback Forklift