As an old company, finding any information about Ingersoll Rand forklifts online can prove to be quite difficult, which is why we’re here to help.

Today we wanted to talk a bit about Ingersoll Rand. Ingersoll Rand has been around since 1924 and has become a global market leader in a broad range of industries from fluid to energy to material handling and beyond.

Ingersoll Rand was best known for its line of telescopic handler forklifts, though they manufactured a ton of straight mast forklifts as well.

Let’s dig in and find out a bit more about the Ingersoll Rand company and what they have to offer.

It is important to note that Ingersoll Rand does not currently manufacture forklifts or telescopic handlers. Volvo CE purchased the forklift line from Ingersoll Rand back in 2006 before later selling it to a company called Skyjack.

Linamar, the parent company of Skyjack, said that they had an interest in purchasing the telehandler and straight mast forklift lines from Volvo. The deal was put into effect in August of 2007, effectively giving Skyjack control of the telehandler line and the rough terrain forklift line.

Skyjack currently produces a variety of material handling equipment and most of the forklifts that you see in the company’s lineup are simple rebrands of the Ingersoll Rand lifts of the day.

Ingersoll Rand produced many great straight mast forklifts and telescopic handler forklifts during their time. The category that you choose to purchase will depend on what you need. Here are a few of the top lift products worth mentioning.

The Ingersoll Rand VR-1056C was the largest production vehicle in the Ingersoll Rand lineup at the time of its manufacturing. It can also be found under the VR-1056D name as well, offering a bit better visibility for the forklift operator, safer transport features, and added lift height.

The VR-1056 features a telescopic boom with all of the boom components enclosed within the four-piece boom to make servicing easy and provide total protection for the operator. The Ingersoll Rand VR-1056 features a lift height of 56 feet and a max capacity of 10,000 lbs.

We recommend the VR-1056 for anyone who is looking for a residential or non-residential vehicle to perform jobs that require maximum height and capacity. The Ingersoll Rand 1056 is one of the most rugged, reliable, and robust material handling machines in the industry and offers operators with top-notch design features.

You can find out more information about the other telescopic handler lines from Ingersoll Rand in the Volvo Archives. 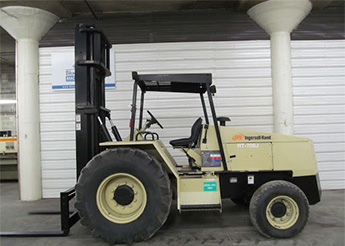 The Ingersoll Rand RT708G was introduced back in the late 90s and was in production up until the company’s acquisition in 2008.

The RT708G was one of the best straight mast forklifts in the Ingersoll Rand lineup.

It was manufactured with a diesel engine and could lift anywhere from 5,000-8,000 lbs depending on the model purchased.

The later versions in 2008 came with heated cabs for added comfort, which of course came in enclosed carriages.

Equipped with large, pneumatic tires and a heavy-duty dual mast design, the RT708G is a great choice for those who are working in outdoor environments on uneven terrain.

Leavitt Machinery also provides customers with 24/7 telephone support and top-notch customer service. You can expect to save anywhere from 10-30% on Ingersoll Rand parts that were never used before.

We also recommend looking at the Forklift Parts website. Forklift Parts is a premier South Carolina forklift parts company and an authorized dealer of Ingersoll Rand, unlike Leavitt Machinery. Here you will find over 3,000 Ingersoll Rand parts for both straight mast forklifts and telehandlers. They also provide customers with a variety of forklift services and solutions at a low price.

Both of these sites are filled with listings of Ingersoll Rand straight mast forklifts and telehandlers for sale. Plus, you can find pieces of equipment for almost half the cost of the originals!

Lastly, we recommend looking at Chicago Industrial. The website is extremely well organized and comes with a ton of different Ingersoll Rand forklift products to choose from. Every model that you find on the site comes at a low sale price too. All of the listings on the Chicago Industrial website include detailed price information, product year, lift capacity, and other key specification that one would need to know before making a purchase.

If you can’t find what you are looking for on these sites, we would highly recommend looking on eBay as well.

Finding manuals for old pieces of equipment that have gone out of production can be quite difficult. Luckily, we have sites like Forklift Manuals, which provide owners and operators with access to old forklift manuals, brochures, PDFs, and error codes.

Make sure to check out their website for a slew of rough terrain forklift manuals.

We also recommend looking at MinnPar if you can’t find what you are looking for on Forklift manuals, as they have a wide range of manuals for almost all of the Ingersoll Rand lifts that were in production.

It is worth looking into Skyjack Telehandlers as well, as they share many of the same design features as old Ingersoll Rand models. You can find a variety of high-quality and durable material handling equipment on the Skyjack website.

Final Verdict - Should You Get An Ingersoll Rand Forklift?

The price range for heavy equipment and material handling solutions is very wide. This is precisely why so many companies that use heavy equipment are quickly turning to used machines to help cut down costs and retain viability in a market that is extremely competitive. Getting a used Ingersoll Rand forklift can provide you with significant value for a low cost.

While the Ingersoll Rand forklift line is not in production anymore, you can still find them sprinkled throughout different dealers across the United States and in other countries around the world. Many of the old vehicles are in perfect working condition, though come with a few extra miles under the hood.

If you are looking to purchase a new forklift, though you want to save some money all while complying with high-quality manufacturing standards, we highly recommend looking into getting an Ingersoll Rand forklift. They are built to work in a variety of industrial applications and are perfect for high-capacity jobs.

To read more about the parent brand that owns Ingersoll Rand, see our Volvo forklift page.

Get Started with Ingersoll Rand Forklift