How Do Forklifts Work

Forklifts are fascinating machines. If you've ever seen one in operation you'll appreciate the power and precision of which they are capable. But, how exactly does a forklift work?

There are different types of forklifts classified by size, function, and power source. Many of the operating principles are similar, especially in terms of the actual lifting mechanism itself, but there are some key differences to consider.

Read on for lots of useful information on the principles and practicalities of each system involved in running a forklift.

How Does a Hydraulic System Work?

Hydraulic cylinders are used on forklifts to provide lift and other movements at the forks. The first part of a forklift's hydraulic system comprises a central tank full of hydraulic fluid and a pump that supplies that fluid under pressure to a special valve called a control valve.

When the control valve is activated, hydraulic fluid is pumped into the lines linking the central hydraulic system to one or more hydraulic cylinders, increasing the fluid pressure at the cylinder. 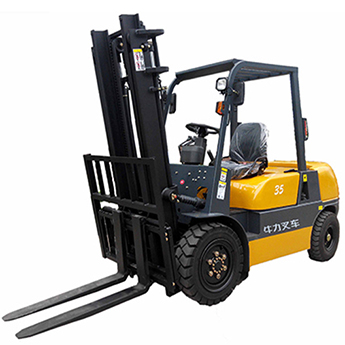 A hydraulic cylinder is a basic piston system, with a central rod and lubricated piston head sealed within an outer tube but free to move along the length of this hollow tube. When hydraulic fluid is pumped into the end of the tube housing the piston-head, the increased pressure pushes the piston, forcing it to move and elongating the entire assembly.

The equation Force = Pressure x Area, known as Pascal's law, states that when a liquid is under pressure it will exert the same pressure at all points in the system.

In terms of hydraulics, this means a relatively small force applied to a fluid in a narrow area can result in a much larger force at a point in the system with a larger cross-section.

The surface area of the piston is much greater than the cross-section area of the hydraulic lines, which results in a relatively small pressure in the line being able to produce a very large force in the piston. This is even sufficient to generate the upward force needed to lift a load of several tons on a forklift's forks.

Once the hydraulic piston has been extended, the valve is closed. Since hydraulic fluid cannot be compressed, closing the control valve fixes the piston in place until a release valve is engaged to allow the fluid to return to the tank and the cylinder to compress back to its "at rest" length.

Most forklift cabs have at least two levers, each of which controls one set of hydraulics. On some smaller forklifts, the lift handle operates an air pump and the system is driven by gas pressure rather than hydraulic fluid.

One of the most important parts of a forklift is the mast. This contains the hydraulic lifting mechanism and is attached to the forks via a frame called the carriage. The carriage consists of both the forks and a backrest, against which the load should be resting before being lifted.

The single-stage upright mast, or simplex mast, is the simplest type of lifting mechanism used on forklifts. The mast has a pair of fixed vertical rails, each associated with an inner sliding rail. Each of these sliding rails is raised by activating its own dedicated hydraulic cylinder.

As the inner rails start to rise in response to the movement of the lifting controls, a pair of roller chain pulleys raise the forks and carriage. This roller chain pulley system has a 2:1 gear ratio so the forks move at twice the rate of the mast rails themselves. This means that the forks on single-stage masts reach the top of the inner rail assembly at the same time as the rails achieve their maximum displacement from the base of the masts.

Duplex (also known as two-stage, or full-free-lift) forklift masts are slightly more complex than their single-stage counterparts, although they may appear similar at first glance.

Both systems use the same configuration of upright rails, each pair with its own lifting cylinder, but the two-stage mast has an extra, centrally mounted hydraulic cylinder.

This cylinder facilitates "free-lift", where the carriage can be raised significantly (around 4-5') before the inner rails begin to rise. 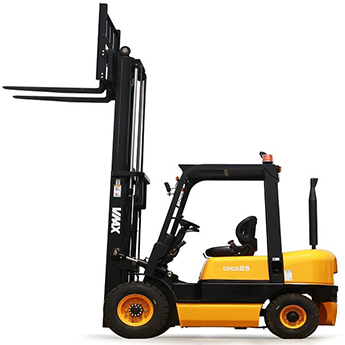 The advantage of the free-lift offered by a duplex mast is in warehouses with limited overhead clearance; the forklift's load can be raised up to 6' from the ground and transported without an overall increase in the height of the vehicle.

Three-stage (triplex) and four-stage (quad) masts also have free-lift capabilities. In addition, these use extra pairs of rails and lift cylinders to allow a greater maximum lifting height. A quad mast can typically raise the load over 20' into the air.

Back Tilt and Lateral Movement

As well as lifting a load on the forks, hydraulics are also used to tip the mast back and forth slightly. This initially allows loads to be picked up from the mast's upright position, with the forks parallel to the ground. Once the load is engaged, the mast is tipped, tilting the load back until it is resting firmly against the backrest on the carriage. This ensures the load's center of gravity is as far back as possible for secure transport.

Many forklift models use additional hydraulic controls to move the forks from side to side, either in unison to align better with objects such as pallets, or individually to adjust the distance between the forks.

Depending on the circumstances under which a forklift is to be operated, extra degrees of freedom in mast/fork movement may be desirable. This is especially true in warehouses with narrow aisles, where maneuvering the whole forklift can be difficult.

For this reason, some forklifts have a "swinging" mast, which can be rotated side-to-side, using separate hydraulic cylinders. allowing the forks to lift and deposit loads to the side of the machine without turning the whole truck.

Others have the capacity to extend the forks away from the forklift's chassis. These are called reach trucks for fairly obvious reasons. The Operator needs to be careful when using these, as the safe lifting capacity in a fully extended position will be significantly lower than the forklift's rated capacity. 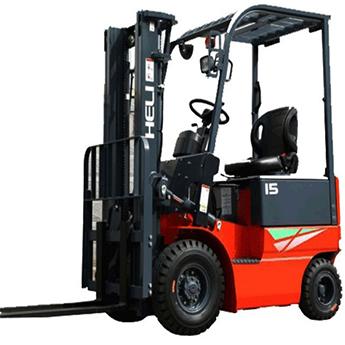 Although they use different fuels as their power source, diesel and propane (LPG) forklifts rely on similar internal combustion principles.

Internal combustion engines are driven by a system of cylinders and pistons, driven by the ignition of fuel in the chamber between the head of the piston and the top of the cylinder.

A mixture of fuel and air is sucked into the cylinder as the piston is lowered, then compressed as the cylinder rises.

Toward the highest point of compression, the fuel is ignited. The pressure from this ignition forces the piston down, turning a crankshaft and providing power to the truck via the transmission.

When the operator presses the accelerator pedal, the amount of fuel and air available to the engine on each cycle is increased. This results in a more powerful explosion, moving the pistons faster and increasing the engine speed.

The main difference between the two systems is in how the fuel is ignited. LPG has a fairly low flash point under compression, so a spark is sufficient to cause combustion. Therefore, LPG engines use a similar system of spark plugs to a petrol engine. Diesel fuels, on the other hand, require significantly more heat to initiate combustion. Diesel engines achieve this by compressing air in the cylinder far more aggressively than in an LPG engine, to the extent the air temperature exceeds 1000°F. When a fine mist of diesel is injected into such a hot environment it spontaneously combusts, providing the required force to power the forklift.

Unlike the other two systems, electric forklifts do not rely on combustion. 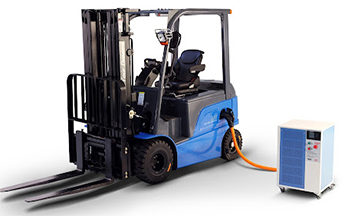 The interaction of electricity and magnetism creates an effect known as electromotive force, which causes the motor to turn.

The amount of force produced is proportional to the current supplied, so the speed of an electric motor is adjusted by increasing or decreasing the available current using a system of variable resistors. The acceleration pedal on an electric forklift is used to reduce the resistance on the main circuit, increasing the current accordingly.

One major advantage of electric motors (aside from the lack of exhaust fumes) is that electromotive force is very difficult to overcome. This means an electric motor will produce an incredible amount of torque regardless of the speed of revolution, removing the need for a complex transmission system.

As far as driving is concerned, forklift controls can differ in appearance but most operate in a similar fashion. Most lift trucks are turned using a steering wheel, whilst the operator pushes directional controls to switch between forward and reverse gear, and braking is achieved by a foot-operated brake pedal next to the accelerator.

Almost all forklifts use rear-wheel steering, which is the opposite of most automobiles. This means that when the steering wheel is tuned, this movement is transferred to the set of wheels furthest from the forks, providing a tighter turning circle in forward gear than with front-wheel steering.

When the brake pedal is pressed, deceleration is achieved by pressing a set of inner shoes against the surface of a drum within the wheel, slowing the truck by friction. Electric forklifts often do not require a brake, as releasing the accelerator is sufficient to stop an electric motor from turning.