Confused about whether you need a forklift or a skid steer for your job? Maybe you are not sure what the difference is between these machines?

Both are types of material handling vehicles but with differences in how they are steered and how they lift their loads. Although they have similar uses, there are some situations that are better suited to each piece of equipment.

Continue reading to learn all about the similarities, differences, and uses of forklifts and skid steers.

Along with Bobcat, other commonly encountered brands of skid steer include Caterpillar and John Deere.

Bobcat and John Deere are also tractor and forklift manufacturers. 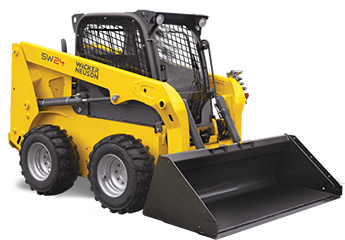 There are a huge variety of attachments available for a skid steer loader or Bobcat, making them a versatile machine.

With the right attachment, this piece of equipment can be used for construction, excavation and trenching, landscaping, agriculture, warehouse work, and snow clearing. They are available with tracks or tractor tires making them useful for working on a job sites that have uneven ground and gravel surfaces.

Forklifts or lift trucks are used for carrying and lifting heavy materials. Like skid steers, they have a plethora of attachments, making them suitable for many of the same jobs as a Bobcat.

If you need a vehicle mainly for moving and lifting, then a forklift is the better choice. If you have most of your work going outside and need only a bit of lifting done here and there, then you could consider a skid steer. A skid steer is also more maneuverable.

Can I Use A Skid Steer As A Forklift?

Forklifts are by far the best and safest choice for lifting a heavy load as the control is better as is visibility for the operator and they can lift much higher than a skid steer loader.

A forklift has a vertical mast that lifts and lowers the forks whereas a skid steer has lift arms that move in an arc. Forklifts are designed to move and lift heavy loads, like moving pallets for example.

Although there are larger lifting-capacity skid steers, they can still be very dangerous for lifting, as they easily get top-heavy and can tip over. If the majority of your work is moving and lifting, in particular large, heavy loads to great heights then a forklift truck should be used.

Driving A Forklift vs Driving A Skid Steer 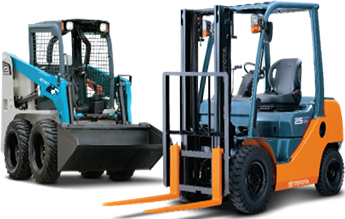 Forklifts are front-wheel drive and rear-wheel steer, to turn a corner the operator uses the steering wheel, like driving a car.

Skid steers are very different to drive as the wheels cannot turn left and right. Each side of the skid steer has a separate engine so when the operator needs to turn they speed up the wheels on the side opposite to the direction they are turning.

On the inside of the turn, the wheels are moving more slowly and anchor the turn. Once the turn is complete, the operator can revert back to having both sides going at the same speed, in order to move in a straight line.

This independent control of the right and left side also allows a Bobcat to be turned on the spot making it extremely maneuverable.

Forklift weight on average is much heavier than skid steers. This is because they have a counterweight in the rear to help prevent them from tipping over when lifting a heavy load. An average lift truck weight is about 9000 lbs.

To get a rough idea of the weight of a forklift, multiply the lift capacity number by 1.5 and then again by 2. The weight of the fork lift truck will likely be somewhere between these two values. 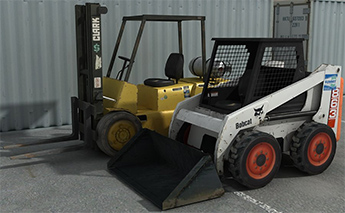 There are also wood chipper and mower attachments for landscaping, and bale spears and pallet forks for agricultural uses.

Like the skid steer, the forklift is also a versatile piece of equipment. There are a similar array of attachments for this type of machine. A side-shift fork positioner will allow a load to be moved right or left without moving the entire forklift, and are very useful in industries such as construction, farming, and paper handling. Fork positioners allow forks to be moved hydraulically for faster handling of pallets, and are used in distribution and warehouses. Fork extensions are helpful for moving longer, awkward loads. Rotators can be used to invert loads and are popular in waste management and agriculture.

To unload trucks, it's important to be sure that the load hasn't shifted while being carried. If it has, then it is more likely to fall when the restraints are taken off.

Also, before unloading, safety checks should be carried out. These safety checks include looking for any obstacles in the unloading area, checking the suitability of the ground surface for supporting the load, and the closeness of any nearby workers to minimize the risk of forklift accidents. Forklift or skid steer brakes must also be applied before unloading any materials.