If you've ever peered into the cab of a forklift, you were probably bewildered by the array of pedals, levers, switches, and gauges. You'd be forgiven for thinking it must be near impossible for anyone to remember how to operate a forklift safely and effectively without getting the forklift controls mixed up.

Only properly trained and certified personnel should ever operate a forklift. However, many people are fascinated by these powerful, heavy-lifting machines and want to gain a better understanding of how they work. So if you want to know your gas pedal from your hydraulic lift controls, read on.

Steering any type of forklift around a busy worksite, picking up and depositing loads in just the right location, is a feat of precision driving. Forklifts need a steering system that allows fine control and as small a turning circle as possible. 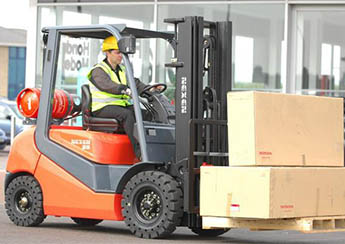 For the majority of forklifts, the drive is provided via the fixed front wheels, while steering occurs via turning the rear wheels.

This is the reverse of the steering/drive system on most vehicles and means that a forklift moving forward steers in a similar pattern to steering a car during reverse parking. This allows a tighter turning circle than that offered by most vehicles with a similar wheelbase.

Operators will become completely familiar with the steering characteristics as part of their forklift training, in addition to learning how to operate the hydraulic lifting equipment.

As in a car or most other vehicles, the accelerator pedal (or "gas" pedal) is used to increase the engine/motor output and, consequentially, the speed of the truck. Most forklifts use an accelerator pedal, along with the directional controls, to drive the machine both forward and in reverse.

Hydrostatic forklifts use the pumping of hydraulic fluid to drive the forklift wheels, instead of a mechanical drivetrain. These are unusual in that they have 2 separate accelerator pedals, forward and reverse, in lieu of directional controls.

Similar to a "stick-shift" road vehicle, some internal combustion-powered forklifts use manual gearing alongside a clutch pedal. This is both to provide controlled gear transitions and because controlled use of the clutch can be used to smooth out the ride, especially when driving at low speeds over rough, outdoor terrain.

The brake pedal is relatively self-explanatory, being used to engage the braking system and slow or stop the forklift. Hydrostatic forklifts are generally missing a brake pedal. In these models, releasing the accelerator to stop the hydraulic flow provides sufficient braking force to stop the forklift safely without a separate system being required.

An inching pedal or inching brake allows the operator to drive a forklift very precisely, making fine adjustments which can be vital when working in tight spaces or picking up relatively fragile loads requiring careful engagement.

These specialized forklift controls act as combination brake and clutch pedals. Depressing the pedal with your foot partially disengages the transmission while simultaneously applying a small amount of brake. In this way, the normal process of slipping the clutch with one foot and braking with the other to maintain slow-speed control is automated, leading to smoother low-speed driving.

Driving a forklift requires the freedom to move both forward and backward. Most forklift directional controls use a system that will be familiar to most drivers of automatic vehicles, consisting of Drive (or Forward), Neutral, and Reverse settings.

Many internal combustion forklifts also have a gear lever to change gearing ratios as the driver operating the forklift accelerates or decreases speed. Electric forklifts do not require these particular forklift controls, since the high torque produced by electric motors facilitates driving a forklift truck through its entire speed range on a single, fixed gear ratio. 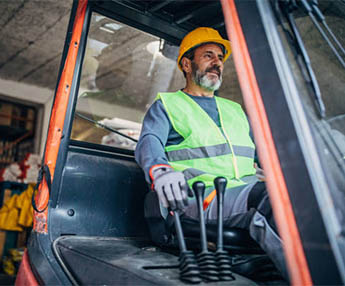 Forklift operators often need to park the forklift while they get out to perform checks e.g. inspecting the security of a load.

It's important to park the forklift securely so it doesn't move while unattended, especially when stopped on a slope.

For this reason, forklifts are fitted with a parking brake.

These sometimes rely on the same sort of drum-brake mechanism as you'd find in some cars' parking brake systems, although the version for a forklift is often more heavy-duty, given the size and weight of some lift trucks.

Some forklift models use an automated parking brake, relying on motion sensors and a drive separation detector to identify when the forklift should be in park mode. Other versions of a forklift's parking brake system will generally either be operated electronically via a button on the dashboard or manually using a lever next to the seat.

The levers you see cluttering up the cab of a forklift truck are used to control the position of the hydraulic lift equipment. There are usually separate levers for each type of movement which the particular mast and fork/attachment assembly can perform. The most basic systems use only the main fork (height) and tilt controls but many models have several others depending on the truck's function.

The main hydraulic lift cylinder on a forklift mast is responsible for raising and lowering the forks. The height of the forks is controlled using a single lever/knob in the cab, which is used to both raise and lower the forks, depending on the direction in which it is moved.

The mast of a forklift can tip forwards or backward to facilitate lifting a load from the ground, and also keeps it stable while the truck is in motion. The forklift operator controls the tilt through a secondary hydraulic system that has its own lever.

Many models of forklift allow for the lateral movement of the carriage, backrest, and forks. This makes both engaging loads and depositing them in the desired location easier for the operator, as they don't have to line up perfectly with the objects to be lifted by driving and steering alone.

Some forklifts also have an extra control lever that is used to move the two forks independently so the lateral distance between them can be adjusted e.g. to suit the different standard pallet sizes encountered in international distribution centers.

Reach trucks can extend the forks away from the forklift chassis. This requires a third control lever (possibly even fourth or fifth if lateral movement and/or fork width adjustment is also supported). It is important to note that lifting capacity can be significantly affected when operating in an extended position.

As well as reach trucks, there are also forklift models which allow the entire mast and hydraulic lift assembly to rotate side-to-side, via an extra control lever near the steering column. These are often used in warehouse settings with narrow aisles, where there is insufficient space to steer the entire forklift from side to side.

Driving this type of forklift, as with most reach trucks, requires specialized forklift training to cover both the operation of the systems involved and the calculations needed to work out the adjusted load capacity given these extra degrees of freedom through which the load objects can be moved.

Some forklift attachments such as bin tippers involve extra hydraulic systems to let the forklift tip loose or liquid loads out of a container. These powered attachments are often connected to the existing hydraulic system and their hydraulic cylinders are controlled using an "auxiliary hydraulics" lever. This is preferable to versions that rely on controls located at the attachment itself since the driver operating the forklift doesn't have to leave the safety of the cab to use the equipment single-handed, or enlist the help of a colleague.

Other attachments e.g. some forklift cement hoppers, use manual lever controls to open and close their pouring mechanisms. These operations are best carried out by a second person so the operator can remain safely in control of the machine.

Driving a forklift safely on a worksite requires other workers to be aware of the truck's location and if it is in motion. For this reason, most forklifts are fitted with safety lights and/or audible alarms to alert nearby pedestrians. Where these are installed as standard, the switches to operate them will be located on the dashboard. However, sometimes these safety features are added as an aftermarket extra, in which case they will generally have their own switches on the light/siren unit itself. 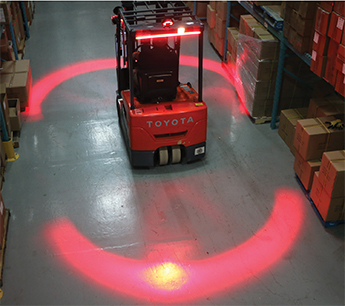 In addition to the various controls used to operate a forklift truck, the driver also needs visual confirmation of several pieces of information for safety purposes. The forklift dashboard displays these using a combination of indicator lights and gauges.

The indicator lights serve as a quick and easy identifier. They tend to include things such as whether the parking brake is engaged, the forklift is in gear, as well as warning about excessive oil temperature and/or pressure and if the battery needs changing.